Talk about all things to do with the acclaimed 4X title.

Range circles, firing arcs... I guess there's some room for interpretation in this phrasing. For the sake of the player though, it might have been nice to connect a vector from the arcs in the rings to an actual turret, for clarity's sake when checking against targets in combat and in the design screen when comparing section coverage. The circles certainly look cool but form over functionality?.
[Edit: Re-thinking this, perhaps it was a design decision not to include the vectors due to the sheer number of potential mount points on the largest sized ships] 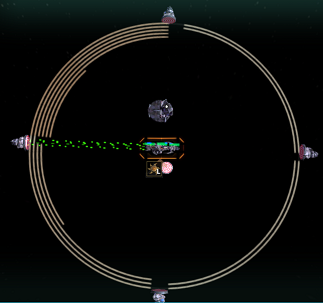 I would certainly be interested in straight up SotS with modern graphics/engine.

Though if I could also change one thing... I would like it if setting up trade routes didn't require quite so many freighters. Maybe more emphasis on ramping up the value of a freighter over time, so there can be a little less on moar freighters.

At the risk of veering off topic, Mecron's mention of his interest in board games lately also gave me an idea... a SotS tabletop fleet battle game could be quite interesting.
Top

Yes definitely a cool idea for a table top board game. I was thinking it'd be awesome to have an expansion in the form of a set of ships/faction cards and possibly political cards for Fantasy Flight's Twilight Imperium. It wouldn't have the grandeur of a full board game release but it could draw upon what's already considered by many the quintessential 4x board game and not have to re-invent the wheel when it comes to game mechanics. There are other 4x games out there too (like Eclipse) but they don't have the same kind of faction specific game play that I'd like to see in a SOTS board game.

Of course, just getting a group together to play Twilight Imperium is always a challenge. Maybe it'd be more successful if it did re-invent the mechanics and try to simplify them more.
Top

we were working on a card game at one point

Is that Control?
If you want a different perspective, stand on your head.
Top

no it was an empire builder/space combat. Control is a planetary invasion game.

Oh I see. Abandoned?
If you want a different perspective, stand on your head.
Top

In reference to what's on Kickstarter Ground Pounders was unsuccessful but The Pit and Control was successful.
Top

fivve wrote: ↑
Tue Mar 19, 2019 6:37 am
In reference to what's on Kickstarter Ground Pounders was unsuccessful but The Pit and Control was successful.

No I meant the builder space combat game.
If you want a different perspective, stand on your head.
Top

fivve wrote: ↑
Tue Mar 19, 2019 6:37 am
In reference to what's on Kickstarter Ground Pounders was unsuccessful but The Pit and Control was successful.

No I meant the builder space combat game.

Oh right, sorry.... Unfortunately I haven't seen or heard anything about such a game. I've only been able to find those 3 board games.
Top

ground pounders was and is a computer game.

And the card game is not abandoned just back burnered in favour of games with more worked out mechanics.

Will the option to create gigantic galaxy maps still be available? Like in SotS1 you could have as much as 350 stars for a nice long game.
Top

As long as turn times don't become excessive when there's that many players and stars\systems involved. Perhaps if there was an ingame way to adjust how many stars\systems have colonizable worlds so if you want a giant map, you've got a way to cut down on the number of colonies to help with performance concerns?

The above is why I don't touch larger maps in SOTS2, turn times quickly become oppressive.
Sword of the Stars 2 : Project Hiver Modder
Creator of the Work-In-Progress Seimei Visual Novel series.
My dream game: Combination of Sword of the Stars 2, Angels Fall First, Conquest: Frontier Wars and Warzone 2100.
Top

It would be a nice option for those who don't mind waiting. But the time invested in creating such a large map could be spent elsewhere I suppose.
Top

So I got Stellaris basically for free recently in a bundle due to peer pressure... ugh. Not my cup of tea. Plus it's blatantly obvious that there's not an original god damned thing in that game. It's some kind of fucked up genetic chimaera that's out there to mock it's genestock with body horror.

We really need a currently supported SOTS 4x out there. Badly. The vacuum you guys left is just slowly filling with unsatisfying crap.

Hope TP:I does well so you guys can move on to SOTS reboot <3

If you guys haven't tried The Pit: Infinity yet btw, you should!
Go Hiver or go home!
Top
Post Reply
1336 posts