Save Our SOTS2 - A Fan Made Patch

Yeah so I feel kinda derpy for asking this but how do you jump into another AI's slot to see what they are doing? I completely forgot. I thought you loaded the game and then selected the AI race from the side but it's not working.

Any help would be appreciated!
If you want a different perspective, stand on your head.
Top

Well, I use the development console to watch ai as it runs on a turn by turn basis, but you can see a snapshot of what an ai player is doing in standard mode by swapping slots with them on the load screen like in sots1. Just load/continue a game session and right click on the player slot you want to swap with.
Top

Right...that's what I was talking about!

That Tarka are currently going mad with expansion in my game and I wanted to see what the other AI were doing since I got stuck on the same side as the Tarka and they surprisingly asked for a cease fire almost right off the bat.

I got off to a bad start and don't really have the fleet power to oppose them.
If you want a different perspective, stand on your head.
Top

Just yesterday i decidet to give this most loved and hated game another spin, i come here becaus i had a modding related question in mind and find this thread. WoW! thanks so much for doing this.
Now i didnt try it out yet but i will for sure!

Rossina has suggested that i could add
<ResearchModifier>50.0</ResearchModifier> <IndustrialOutputModifier>50.0</IndustrialOutputModifier> <TaxRevenue>50.0</TaxRevenue>
to the factions xlm file.
Rossina, if you read this, i have tried this but could not make it work, it doesn not seem to have any effect, maybe iam doing it wrong?

Thanks alot in advance,

Well, try out the patch and set the AI to Very Hard and see what happens. Then let me know if you see any particular problem you need fixed and I'll see what I can do!

I didn't change much specific for Hivers beyond a bit of fixing how they travel, but a lot of improvements went into budget management and other general improvements so that might be all they needed. Again, let me know if you see anything specific!

Edit:
I think there might be room for improvement on how the AI does defense. Perhaps this is more vital to Hiver than others (as in SOTS1, they'd marshal their entire fleet to defend a planet but I'm not sure they do this in SOTS2). I've noticed AI has some problems keeping defense fleets in systems and the AI doesn't do Intercept missions either. So, let me know what you see and I'll work on it.
Top

I will do that for sure!
I dondnt read the entire opening post before posting as i got too excited, just now have i finished reading it and i feel abit like a fool so i edited my post ...
So apart from not beeing able to manage their budget, the AI was also terrible at ship design and fleet composition.

The designs have really crippled them so far.

iam looking foward to testing this, your effort is exactly what i was afraid noone could do. Most apreciated here!
If you know how to boost their income in general, feel free to let me know

Cheers and thank you so much!

The AI has a pretty decent ship design and fleet composition algorithm. It's all based on fleet_templates.xml for a basis though.

From there, fleets are built in quantities weighted by their template and the "stance" the AI is in (defending, expanding, etc) and fleet compositions use an internal weight of different types of ships that qualify for the entries defined in a particular template. Weapon types are based heavily on tech and faction preferences while ship section preferences are user modifiable in the faction's section_preferences.csv file (if memory serves me for the file name).

I helped improve the ship MODULE and PSIONIC selection logic though, but those are relatively minor elements of a fleet design.
Top

Thanks alot for the insight!

I have however noticed on several occasions, that the weapons and sections choice of the AI was terrible.
They almost never used their best weaposn, hivers have actually never used anything beyond starting weapons in my games, up to 100 truns.
They have also frequently ignored their armor tech, which is absolutely crucial, and they loved drone carriers.

They barely made any new designs, and as metioned, didnt use any new weapons. Only heavy maas drivers and some missiles.
And that was on the small disc map where i made them start with max. planets and income, set them to very hard and let them colonize as much as they could up to turn ~100.
Most of the times ( i only tried this like 3 or 4 times, it was just too frustrating and time consumeing) they didnt sent any offensive missions at all :/
It was very sad times.
i will report on how this one goes.

edit: i just copied the files from your mod and the game starts up fine, i am excited now

Hmmm, yeah test it out.

In SOTS2, there are a LOT more techs to research, not just guns and ammo. I personally think this makes it harder for the AI to focus on offense. For example, even with very high incentives to research point defense, I often see it delayed until turn 100 for AI. I think it's because they're in Expanding mode until they feel boxed in and then they switch to Conquering mode (or Defense mode if being attacked by a stronger enemy). In Expanding, the AI doesn't focus on weapons as much as other enhancements. That's why, for example, adding "EMPIRE" or "ENGINE" to a weapon technology in the techtree.techtree file will give one more bite at the apple for that tech to be selected during these more "peaceful" expansion periods.

I think SOTS2 was intended to be a "slower" game than SOTS1, with more time to do empire management, but most people (including myself) don't really like to play it that way (I think it's because the diplomacy system was never filled out to match such a play style). They expect an AI that goes straight for your throat and tries to kill you with everything it has.

I enjoy playing as Morrigi and setting up peace and trade treaties. The enhanced "Lobby" political action gives me the power to dominate politically by essentially forcing others to like me

Then I Lobby the factions against each other and force them to into war. In the meantime, the AI is Lobbying against ME which can affect my ability to Lobby against THEM.

Eventually, I'm hoping to get the Political game to the point that the AI will try to Peace with you, then eventually backstab you once it reaches a certain point. Hivers for example should assign a high priority to NAP treaties so they can request Gate Permission. Morrigi should pursue Cease Fire to get Trade Treaties. Etc.

Hopefully some players will test out the Political components and let me know their thoughts. It probably still needs some balance.
Top

Also i want to thank you for the excellent tool, the sots2 file converter, i have been able to give the tarkas a new look. 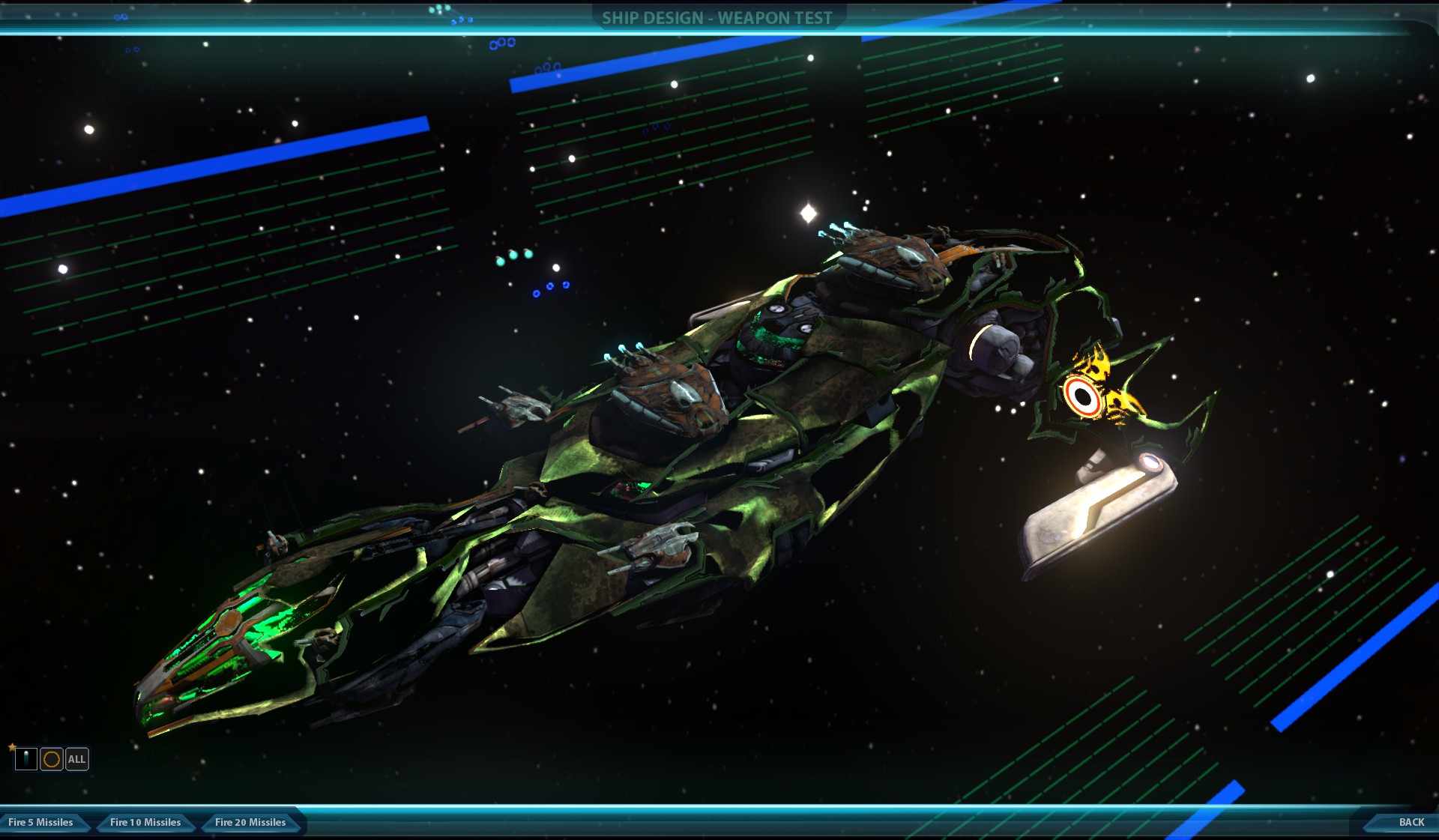 you have a very interesting style of playing and what your preferred scenario looks like,

but thats the cool, rather unique thing about sots, its so immersive that we want to experience it in so many different ways, it just fires up the imagination.

I always wanted the dark scenario where humanity is confronted with an evil hive mind race that looks to exterminate and assimilate everything.
Thus i need a capable hiver foe

So I spent the night on a few Hiver games and it looks like the fleet design logic DOES need some work. I saw an Armada CnC with 14 point defense cruisers in a fleet. Also saw a lot of planet attack designs which focus on population damage over weapon damage so mostly missiles and heavy drivers. Planet attack might make sense for Invasion fleets, but not sure why almost all the designs were based on that.
I'll have to look at how the ship type is determined (brawler vs planet attack vs point defense vs disabling). Also saw a ship design for Energy weapons which didn't make sense at all for a ballistics favoring race. Sometimes a ballistics race will get the "energy" tech preference by random chance at game start (or vice versa) which gives a preference, but I think it might be something else as I saw it happen in two games.
Top

try to remember that the base code often builds ships at separate planets for a large plan and hence this creates specialty fleets whose only purpose is to join up with another fleet someday.

hey, awesome to hear that you are testing the hivers, in my opinion they could use some beam weapons if they happen to research that, if only they would make fleets more focused on killing ships. Sure they are fast and can outrun to snipe planets, but that is, while effective at times, a rather boring playstyle and the AI generaly lacks the ability to judge whether an atempt to snipe the planet will be suicidal or not.

So i would really like it if they would focus on ship to ship combat, as hiver ships are really good at that aswell.

Oh and maybe you can find the reason why they would not put on the best armor, or use the hammerhead front section. Those things are really crippling.

Thanks for your effort!!

willdieh wrote: ↑
Tue Mar 05, 2019 3:12 pm
Also saw a ship design for Energy weapons which didn't make sense at all for a ballistics favoring race. Sometimes a ballistics race will get the "energy" tech preference by random chance at game start (or vice versa) which gives a preference, but I think it might be something else as I saw it happen in two games.

Small interjection, this is probably a good thing due to the existence of Meson, Grav, Disruptor and Deflector shielding\sections.Anyone going into a late-game battle, especially in MP has to be aware that those shields\sections could come out and cause problems if one has only invested into a single Ballistics or Energy focus. In the AI's case since they can't add in a counter to a hard-counter like that in their designs, having a few possible weapons of the other tree would be beneficial.

Whether they'd use it though... /shrugs
Sword of the Stars 2 : Project Hiver Modder
Creator of the Work-In-Progress Seimei Visual Novel series.
My dream game: Combination of Sword of the Stars 2, Angels Fall First, Conquest: Frontier Wars and Warzone 2100.
Top
Post Reply
331 posts