Sounds like good stuff RS. I appreciate the effort.
If you want a different perspective, stand on your head.
Top

Nice to heard that, Rossinna.
Top

Any news Rossinna? No pressure, only asking. I hope new version is going well

Easter holidays, had to look after the kids. It is impossible to focus when dealing with them, two with ADHD.
They left a few hours ago (from this post), so I should be able to resume work.
Sword of the Stars 2 : Project Hiver Modder
Creator of the Work-In-Progress Seimei Visual Novel series.
My dream game: Combination of Sword of the Stars 2, Angels Fall First, Conquest: Frontier Wars and Warzone 2100.
Top

Feel free to take a bit of time to recover from that ordeal if need be. I know I certainly would.
If you want a different perspective, stand on your head.
Top

It isn't that hard, its more about trying to figure out what exactly would help the AI without doing something that'd terribly overpower the faction - that's been one of the larger problems with Loa.

But it does require me to be able to focus; something that's impossible if I have to keep breaking up fights and arguments.
Sword of the Stars 2 : Project Hiver Modder
Creator of the Work-In-Progress Seimei Visual Novel series.
My dream game: Combination of Sword of the Stars 2, Angels Fall First, Conquest: Frontier Wars and Warzone 2100.
Top

Just wondering if you'd be willing to outline what you're seeing as the primary issues the AI struggles with?

It seems like you've identified some key areas (such as build and research priorities) that you're using to counter-balance these perceived AI weaknesses, but do you think it might be helpful at all to actually identify the specific AI failures? It might help others contribute alternative suggestions on how to improve the game.

Or perhaps this subject has already been covered in detail somewhere else? I know I've stumbled on fragments of discussion here and there on what some believe to be the failures, but no clear outline that I can remember.

Well those are the main problem areas, indeed they probably are for any 4X AI.

The AI has to be able to hold their own in the strategic layer while performing the multitude of tasks that a game like this requires, and then they have to perform well in the tactical layer as well.

Most of VAE focuses on the strategic layer as without investing in methods of getting to the hard-coded stuff, I can't do much about the tactical layer. (Note: and I'm highly hesitant to go near it since I've had to deal with a publisher before in another mod I was involved in for a different game.)
Besides, the strategic layer is still very important since even if the AI somehow perfectly played the tactical combat every single time, they'd eventually get overwhelmed due to making poor choices.

I describe my progress over in the Modding Picture of the Day thread as to not clog this thread up (and its a bit of a tradition), but right now ballistic weapon problems and Liirian Tactical AI are the two main issues, though the Morrigi tactical AI doesn't do much better. The strategic AI is doing far better as of my latest test version as they are balancing out their costs, production and income with actually useful tech choices.

As you probably already know, the AI focuses on weapons with high structural damage and good rate of fire. They don't factor in armor piercing or armor matrix damage much (if at all, seen no evidence of it) so technical upgrades such as AP rounds vs the basic gauss\mass rounds are ignored since the AI thinks the more damaging weapon is better, even if it winds up being worse overall due to deflection.
That's also why in most cases PD weapons will have AI priority for any mount they can be on. Its a major issue I face in PH, but that can be dealt with over there. I've no idea if I can do anything about it in VAE since nerfing PD is outside the scope of VAE (I hope).
Sword of the Stars 2 : Project Hiver Modder
Creator of the Work-In-Progress Seimei Visual Novel series.
My dream game: Combination of Sword of the Stars 2, Angels Fall First, Conquest: Frontier Wars and Warzone 2100.
Top

Note: and I'm highly hesitant to go near it since I've had to deal with a publisher before in another mod I was involved in for a different game.

By that, I assume you mean hesitant to begin delving into the code? Do we know how Kerberos would feel if say someone hooked into their sots2_managed.dll? I can understand how it might be frowned on, but on the other hand with the current status of development with the game, it might benefit everyone if the fan base could somehow contribute to the game. Sales might improve if it was perceived that improvements were possible.

I ask because that has been where I've been focusing my own personal efforts. I've been working on the lower level components of the game. Things like file formats so far, with textures more or less done and work being done on the model format. Since the pipeline/mod tools were never released, I thought I'd try and provide a workable substitute. AI modification, beyond that provided by the .xml configuration files, would be my next step assuming such a step is not completely verboten.

The best bet would be to send a PM to Mecron, but it really isn't Kerb who'd be the risk - its Paradox. Modding has always been a grey area so its usually a good idea to ask what you're allowed to do - I remember being requested a long time ago to not touch Mining Ships in PH for example, its also why there's no Refugee ships or the PeaceKeeper in there (though I've got no way of adding them properly anyway).

EDIT: That's my personal stance on it. As with everything it may be wrong as Paradox seems to have disowned SOTS2 but it should be okay as long as you make it perfectly clear you're using Kerb's stuff and not your own. /shrug
Sword of the Stars 2 : Project Hiver Modder
Creator of the Work-In-Progress Seimei Visual Novel series.
My dream game: Combination of Sword of the Stars 2, Angels Fall First, Conquest: Frontier Wars and Warzone 2100.
Top

Right. Pending the outcome of this test run I'm doing as I type this post, should be a release today. Without doing more serious changes, there is not much more improvement I can get out of the AI.

As of right now on most maps (Liir and Loa still have problems on tiny maps), all AI factions can survive and perform well up to turn 200. They all expand, colonize, tech, survey and wage war as good as they possibly can without getting directly at the AI itself.
I've managed to make it more 'vanilla' then I expected to be honest, since a good number of changes were able to be reverted once I got the AI's tech and colony priorities correct.

So while it isn't a pure vanilla experience, its as close as I can get while allowing the AI to do what they need to do. Morrigi is the least like vanilla due to their FTL changes, but the AI simply could not handle it with any real form of competence since I can't force them to build grav boats - if one day a way is found to do that then I'll gladly revert them back to their base FTL speeds and function but until then, the Grav boats remain disabled.

However I've decided that for those like me who would rather get the AI to perform even better, I'm in the process of making a totally optional sub-mod which revisits every weapon in the game and fixes tags, a few other issues and most importantly, alters them so the AI can figure out what is better - the AI should no longer ignore AP weapons for example even if has been researched.
But since this requires considerable balance changes, it is a separate zip.

PS. No, I'm not going to touch the randoms apart from bug fixing - I've caught some issues with the VN which was causing crashes occasionally.
Sword of the Stars 2 : Project Hiver Modder
Creator of the Work-In-Progress Seimei Visual Novel series.
My dream game: Combination of Sword of the Stars 2, Angels Fall First, Conquest: Frontier Wars and Warzone 2100.
Top

Sounds good RS. I'll try out your optional mod as well when you release. Thanks again for the hard work.
If you want a different perspective, stand on your head.
Top

Version 6 is up. Apart from the Loa AI spamming gates to no end, it should do as advertised now. 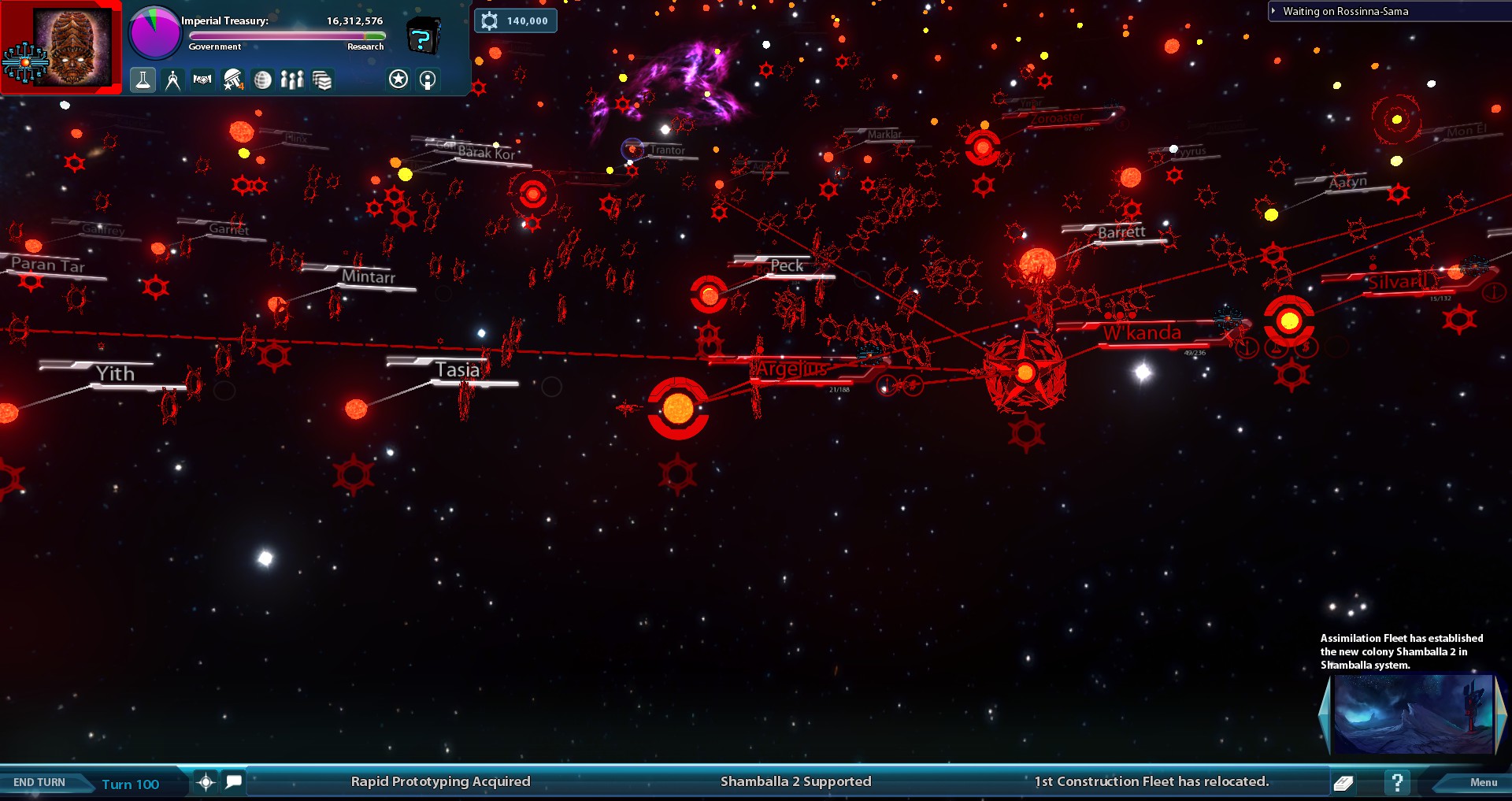 I don't have any plans for V7 as of yet, as I'm waiting to see what willdieh can do.

As for the optional AI weapon rebalance thing I mentioned, I'll attempt to work on it tomorrow. Too tired to really focus on it right now.
Sword of the Stars 2 : Project Hiver Modder
Creator of the Work-In-Progress Seimei Visual Novel series.
My dream game: Combination of Sword of the Stars 2, Angels Fall First, Conquest: Frontier Wars and Warzone 2100.
Top

Thanks Rossinna. I'm going to test this new version today and this weekend. Count on me for your experimental weapon mod.

PD: BTW, here is a link where you can find 4 new galaxy maps (from small to big) for testing (generated using the Galaxy Generator).

Thank you for your hard work, Rosinna. You are very kind for sharing this with us...and your effort is very appreciated!

By the way, some of those maps are new ones and others are old SotS1 custom maps, converted using galaxy generator as Haplo said (plus a bit of after-editing, sometimes). They need to be tested more deeply but all of them seem to work properly in early game.